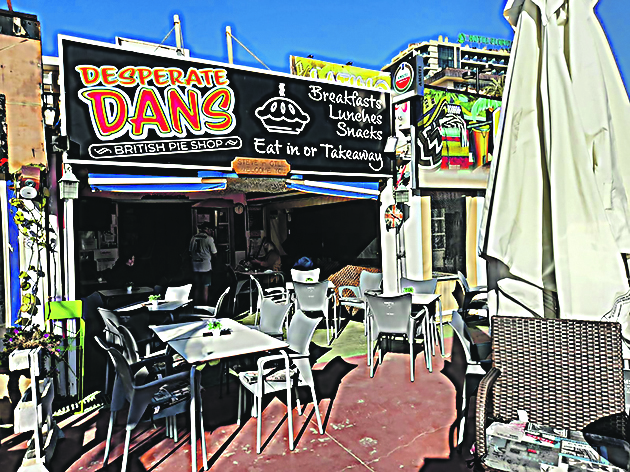 Gill and Steve are well known on the coast have run bars in Fuengirola for a number of years and appeared, numerous times on Channel 4’s “New Life In The Sun”. take away. The bar in located in Fuengirola port on the strip facing the car park. The menu features Gill’s famous home made pies which are available to eat in or In addition to the pies they offer breakfast, lunches and snacks together with an excellent range of reasonably priced drinks.

They now have daily deals on food and Sunday roast with all the trimmings. Roast beef or pork €8.50 and roast lamb €9.50. We have known Gill and Steve since they arrived in Spain and opened their first bar and are pleased that this one is as successful as their previous ones.. Desperate Dan’s is open every day except Thursdays. This is a bar that everyone should visit at least once during their stay. It would be advisable to book for Sunday roast dinners as this is very popular.

Gapp Properties is owned by Sandy who has lived...
Read more
Entertainment & Activities

The most famous street in the old fishing village...
Read more
Excursions

The mosque, The Synagogue, The Roman Bridge and The...
Read more
Advertisers

The Mariners Pub, in Fuengirola Port has been established...
Read more
Locations