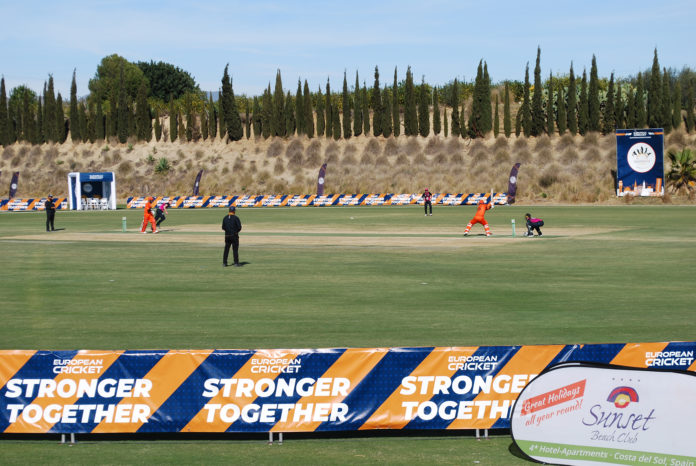 The Cartama Oval is only 15 minutes drive from Malaga airport It has a stunning location surrounded by the Malaga mountains. It is a top-class cricket ground offering local, regional and tour side tournaments played in good spirit. A picturesque facility ideal for teams or individuals players wishing to play with or against local sides.The history of Malaga Cricket on the Costa del Sol began in the mid 80´s when an expat saw an advert for a touring team from East Anglia wanting to play some pre-season games in warmer climates and the first game was held in March 1985 in Arroyo de Miel. The climate on the Costa del Sol is perfect for playing cricket all year round. Currently until 18 March 2022 the European Cricket League are playing their matches midweek with 30 nations taking part. This ground is very popular as many teams from round Spain hold their matches here including teams from Madrid, Granada and also foreign touring teams.Get involved and join the club. Like all clubs, members are needed to thrive and they ensure that new members of all ages and abilities are welcomed and encouraged to take part. If you are new to the area, or have been living here for years and want to play cricket then please get in contact
631 449 561.
Senior, Junior Cricket
Teams that feature here locally are the Costa del Sol Crusaders, Costa Vikings, Combined Colleges and Malaga CC and players from Gibraltar League for local matches, there are T20 tournaments held with other Spanish sides as well as Touring matches from clubs outside of Spain.
Junior cricket coaching sessions are held with local players from the ages of 7-15 held by senior players and The England Cricket Team Psychologist David Young.

The Mariners Pub, in Fuengirola Port has been established...
Read more
Advertisers

The Sunny Side Cafe

Martin and Priscilla moved from the Phillipines and opened...
Read more
Entertainment & Activities

Here on the Costa del Sol we are very...
Read more
Entertainment & Activities

Marenostrum Fuengirola started in 2016 as an open air...
Read more