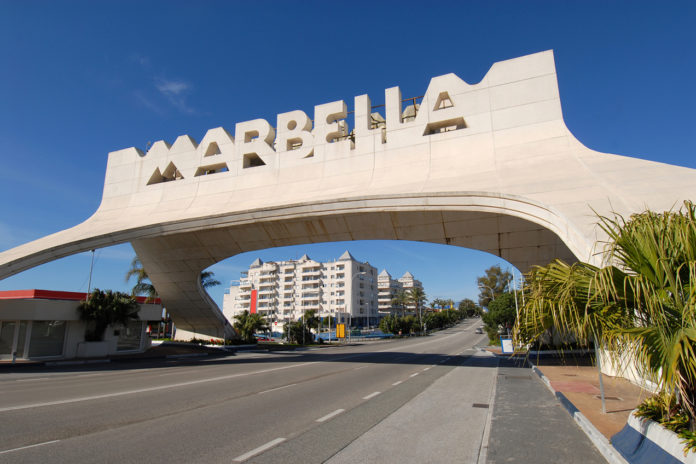 As you drive into Marbella you will enter the main town by going under the iconic arch with this famous city’s name. Marbella has many places of interest for visitors. The old town contains the ancient city walls and the two historical suburbs of the city, the Barrio Alto, which extends northwards, and the Barrio Nuevo located to the east. The ancient walled city retains most of it’s 16th century heritage, including the well known Orange Square, an excellent example of Castilian Renaissance style. Around the square there are three remarkable buildings: the town hall housed in a Renaissance style building, the Mayor’s residence, which combines Gothic and Renaissance elements in its facade, with a roof of Mudejar design and fresco murals inside, as well as the Chapel of Santiago, the oldest religious building in the city which is believed to date back to the 15th century. One of the highlights of the Barrio Alto is the Ermita del Santo Cristo de la Vera Cruz (Hermitage of the Holy Christ of the True Cross) church. Although Orange Square receives visitors all around the year, it particularly gets crowded in the summer time with visitors from around the world as well as locals.

The numerous bars and restaurants in the square provide good value for money. Between the old town and the sea there is a small area known as the “historic extension” which contains a small botanical garden on Paseo de la Alameda with fountains and a collection of ten sculptures by Salvador Dal. This is on Avenida del Mar, which connects the old town to the beach. Marbella’s famous Golden Mile is actually a stretch of four miles (6.4 km) which begins at the western edge of Marbella city and stretches to Puerto Banus. This stretch houses some of the most luxurious villas and estates with views of the mountains and the sea. This area also has the Palace of King Fahid, as well as some landmark hotels like the Melia Don Pepe, the Hotel Marbella Club and Hotel Puente Romano.

The adjoining Puerto Banus is a much visited area where you will find privately owned luxurious yachts and boats moored in the marina. You will spot quiet of few Ferraris and Lamborghinis driving around in the port. The shopping experience is especially attractive for those who love luxury brands. Here you can shop in big name boutiques such as Louis Vuitton, Gucci, Jimmy Choo, Valentino, Bulgari and many more! Nueva Andalucia inland from the marina of Puerto Banus is home to many golf courses. In golfing circles it is known as Golf Valley. The bullring below Centro Plaza marks the entrance to Nueva Andalucia where the predominant building architecture is based on traditional Andalusian design.

The nearby historic town of San Pedro Alcantara contains two industrial buildings of 19th century architecture, namely the Trapiche de Guadaiza and the sugar mill, which now houses the Ingenio Cultural Centre. San Pedro de Alcantara area was a sugarcane plantation in a bygone era and still contains some of the casetas used to house plantation workers. Finally, Las Chappas is situated on the site of Rio Real. The 27 kilometres of coastline within the limits of Marbella is divided into twenty-four beaches with different features. They generally have moderate surf, golden or dark sand ranging through fine, medium or coarse in texture to gravel. Amongst the various notable beaches are Artola beach, situated in the protected area of the Dunas de Artola, Cabopino, San Pedro and Puerto Banus. The beaches of Venus and La Fontanilla are centrally located and very popular. Marbella offers some great Party beaches which are very popular with young people. Nikki Beach is one of the most famous one along with Playa Padre and La Sala by the Sea. Enjoy discovering Marbella, the old town and the beaches.

The Mariners Pub, in Fuengirola Port has been established...
Read more
Blog

The owner Gary from UK is a big football...
Read more
Advertisers

Gill and Steve are well known on the coast...
Read more