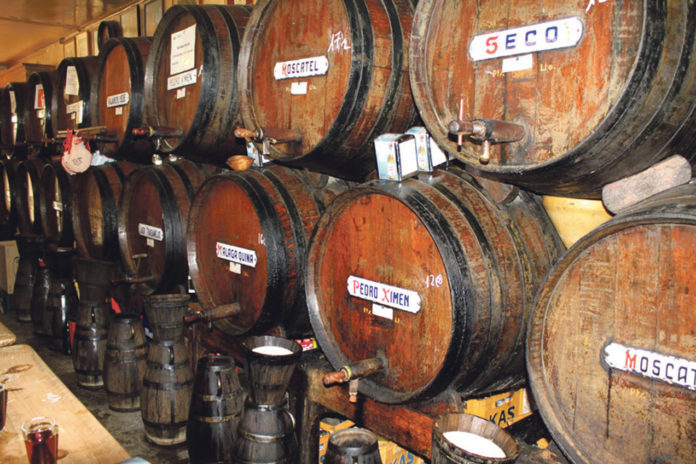 Wine has been produced in the Malaga area for many years with the first evidence dating back to Roman times. this is a prismatic fermenter found in Cartama, about 30 Km from the city. When this part of Spain was under Arab rule the consumption of alcohol was forbidden. Initially the punishment for being drunk was death, this was replaced by fines and then a tax on the sellers and producers of wine.

When the Catholic king reconquered Malaga one of the things that he did was to establish a Brotherhood of vintners. In 1791 the Spanish Ambassador to Moscow presented a few cases of Malaga wine to the Csarina who liked it so much that she exempted from taxes all wines from Malaga imported into Russia. Over the next 100 years or so various actions were taken to ensure the purity of wines from Malaga. This culminated, in 1900, with the formation of a Board to ensure the interests of the wine trade, licensing and the appointment of arbitrators and experts to oversee the legitimate labelling of wine. In1937 the “Denomination of Origin (DO)” system was established in Spain and Malaga was one of the first regions to be awarded this status. As far as the wine itself is concerned, Malaga has always been associated with sweet wines made from grapes dried on grass mats under the areas strong sun. Nowadays the regions wines are produced by different methods such as the stopping of fermentation with grape spirit before all the sugar is converted into alcohol.

The Malaga DO can be used for both fortified wines with alcohol levels between 15 and 22% and wines with at least 13% alcohol produced from over-ripe grapes with no artificial alcohol added. There are four distinct styles of wine:

2. Moscatel – these are made solely from the moscatel grape variety and are the most aromatic of Malaga wines.

3. Vinos de Lagrima – again made from the PX grape but the name lagrima, which means tears, indicates that the juice used is not pressed but obtained after drying the grapes briefly.

4. Solera – this is a regional speciality taken from the methods used to produce sherry. The wines are aged in oak barrels and small amounts are taken from each years barrel and used to replace the wine taken from the barrels of the previous year. Wine for bottling is, of course, taken from the bottom barrel. This ensures a consistent blend of wines from different years.

Gill and Steve are well known on the coast...
Read more
Holiday Advice

Benalmadena Costa was, until not so long ago, a...
Read more
Holiday Advice